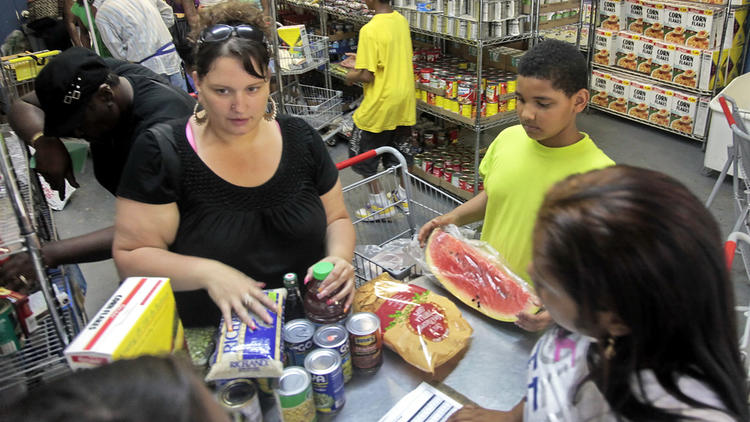 Stacey Miller, 28, center, and her sons Donavan, 11, second from right, and Troy, 10, pick up groceries at the Bed-Stuy Campaign Against Hunger food pantry, which serves upwards of 10,000 low-income individuals monthly in Brooklyn, N.Y. Miller, unemployed and pregnant, says the pantry “helps a lot and have fresh foods like meats and fruits for the kids.” (AP Photo/Bebeto Matthews) (Bebeto Matthews / ASSOCIATED PRESS)

No one really knows how many people go to bed hungry around the world, although it’s definitely in the millions. The United Nations estimates that 16,000 children die every day due to hunger-related diseases, while many more are malnourished and suffer from a multitude of illnesses.

Numerous organizations, both governmental and private, have sought to address this problem, with varying degrees of success. I recently became acquainted with a relative newcomer among the non-profits combatting hunger. My editor gave me a package of dehydrated food produced by Kids Against Hunger, procured at one of our local food pantries. I took it home and proceeded to research this non-profit.

Kids Against Hunger has a radically different business model from most food charities. For one thing, it gathered a collection of food scientists who spent three years coming up with an “ideal” food formulation that is far superior to the beans and/or rice that many organizations supply to the malnourished of the world. They also went to the trouble of designing a package that would keep the food shelf-stable for at least three years.

The greatest innovation the charity made, however, is in its structure: Kids Against Hunger is basically a franchise operation, with processing and packaging operations in all 50 states (four in Indiana). Each “franchisee,” whether Rotary, Kiwanis or church group, is licensed to produce the food formula and package it with volunteer labor. The food is then distributed to those in need, both in America and abroad.

Each package of food feeds six people, and the ingredients were chosen with regards to cultural and religious food constraints. Preparation is simple: just add water and boil for 20 to 30 minutes.

Back up a second. Boiling a pot of food is anything but simple in many parts of the world. Fuel is expensive, consumes natural resources, pollutes and can be extremely hard, and sometimes dangerous, to come by. Many children cannot attend school because they must spend their days gathering firewood for cooking. In addition, smoke inhalation from open cooking fires sickens millions every year.

All of these issues led South African Sarah Collins to invent the Wonderbag in 2008. This nonelectric “slow cooker” is based on principles of thermal cooking, such as burying pots of food in the ground to finish cooking once they’ve been heated to boiling over a fire.

The operation of this gadget really is simple. Place your ingredients in a suitably sized pot, boil for five minutes, then place in the Wonderbag. Rice-based dishes such as the Kids Against Hunger meal take about an hour to finish cooking. Dishes with meat take four to five hours. All with no danger of overcooking or burning, and with the use of much less fuel than conventional cooking. (It’s worth noting that for every Wonderbag purchased in a developed country, one is donated to a developing country.)

It’s not just people living in poverty who desire to eat frugally; students, retired people, single parents, many of us need to stretch our food dollars. I am therefore including three recipes today from “Good and Cheap” by Leanne Brown. Written as the capstone project for her master’s degree from NYU, the recipes are designed to feed families living on SNAP (what used to be known as “Food Stamps”). I have an early copy, as I was a Kickstarter backer. The book will not be available to the general public until summer, but you can download it.

If you ask yourself, “What shall I cook for dinner tonight?” and are able to answer, “Whatever I want,” count yourself very lucky, indeed.