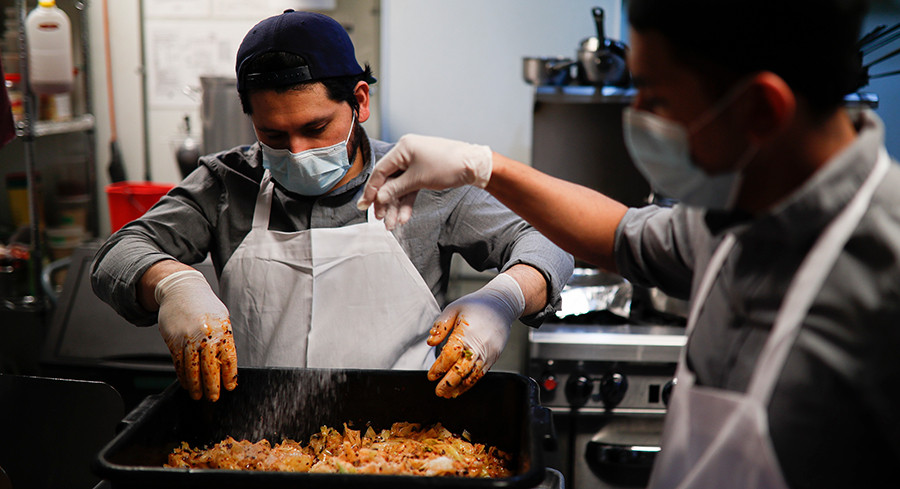 New York City is launching a $170 million plan to feed its residents as coronavirus-driven job losses leave many unable to pay for food — and it’s urging all grocery stores to require their customers to wear face coverings.

“Half a million New Yorkers have lost their livelihoods in just the last few weeks, and money’s running out. Whatever savings people had is running low. A lot of people already have run out of money,” Mayor Bill de Blasio said at a press conference Wednesday. “People are literally asking ‘Where is my next meal coming from?’”

The city plans to spend $50 million to amass an emergency reserve of 18 million nonperishable meals to guard against any disruption to the food supply.

New York expects to distribute 10 million meals directly in April, and as many as 15 million in May.

School buildings, with classrooms closed, are handing out meals to both children and adults who need them.

And meals are being delivered directly to seniors and people with health conditions that make it too dangerous for them to leave the house during the pandemic, though some seniors have missed out on reliable delivery.

“We will not let anyone go hungry,” de Blasio said.

The city has signed up 11,000 for-hire car drivers — many who have seen their livelihoods dry up — to deliver food to the homes of people in need, and get paid by the shift.

Officials will now move to sign up entire senior buildings in the meal delivery program.

De Blasio is also urging supermarkets to refuse entry to any customer not wearing a mask or covering their face with a bandanna or scarf. While it’s up to private grocery stores to decide whether to institute such a rule, de Blasio said the city would help enforce it at stores that do.

“Any customer who says ‘no, I refuse’ should not be let in. We will back up those stores. We will help you enforce the rules,” the mayor said. “No shirt, no shoes, no service — it’s the same exact concept.”

All New Yorkers are encouraged to wear a face covering when they leave the house, but the guidance is not mandatory.

Grocery store workers are among the essential workers most at risk of exposure to the virus.

“This is not what they expected. These are folks just trying to make a living for their families. They did not expect to be on the front lines of an international crisis, but they are acting with the same resolve and the same spirit as all our other heroes,” de Blasio said. “We have to protect them.”

The city has also pledged $25 million to existing food pantries and soup kitchens, which are seeing a surge in demand. At the Campaign Against Hunger in Bedford-Stuyvesant, Brooklyn, which the mayor visited Tuesday, the number of visits has doubled from 250 to 500 a day.

For truckers bringing food into the city, officials are setting up rest areas near the Hunts Point wholesale food market and on Staten Island.

Kathryn Garcia, the city sanitation commissioner, has been tapped as the new food czar during the crisis.

“We have a lot of work to do,” she said Wednesday. “We will not compound the tragedy of the pandemic with a tragedy of hunger.”