DNAinfo: Do or Dine Chef Wins $16,000 for Bed-Stuy Charity on Food Network Show

By Camille Bautista via DNAinfo 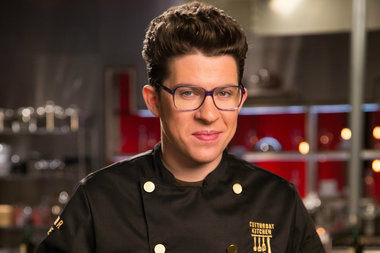 Justin Warner, Co-Owner of Do or Dine

Warner, co-owner of Bed-Stuy’s Do or Dine, took home the prize for the Bed-Stuy Campaign Against Hunger in the final round of the Food Network show, “Guy’s Grocery Games,” which aired Sunday.

Up against fellow Food Network stars Ron Ben-Israel, Penny Davidi and Pat Neely, Warner triumphed for his neighborhood and charity of choice by creating winning dishes in the grocery store cooking competition.

The show tasks contestants with “real-world challenges,” such as finding workarounds when essential items are out of stock, or creating dishes using a $10 budget.

Sunday’s show tested the chefs’ abilities with ingredients such as potato nuggets, which Warner used in a beef summer roll paired with pho.

His final dish, grape soda ribs with Brussels sprouts, pushed Warner to the shopping spree round in which he was able to collect items that totaled $16,000 for BSCAH.

“You can’t imagine how excited we were when Justin decided to make us his charity of choice,” Samuels said. “We’re entering into a very busy time and the need will definitely be greater. These funds will give us the ability to meet that demand.”

BSCAH is based in Bed-Stuy and serves neighborhoods throughout Brooklyn, Queens and The Bronx.

The organization sees a steady stream of approximately 30,000 individuals who use their emergency feeding program and pantries on a monthly basis, Samuels added.

Following Warner’s win, an anonymous donor volunteered to match people’s donations up to a total of $16,000 through the end September, the director said Tuesday.

The “Guy’s Grocery Games” victory isn’t the first time Warner’s given back to the community. In October, he brought home $2,500 for BSCAH after appearing on Food Network’s “Cutthroat Kitchen: Superstar Sabotage.”

“I was over the moon to win for my charity,” Warner said of the most recent show, adding that he owes a lot of his success to Bed-Stuy. “The goal is to really get people amped up and show that people in the neighborhood are doing these incredible things. There’s no such thing as too much help.”

Please join us in bringing our Sweet 16 to a joyous close by supporting this match challenge with a monetary gift.